Are Muskrats Friends or Foes?

Living with the Misbehaved and Maligned Muskrat 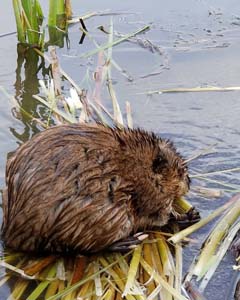 Seasoned weekend warriors just know that a lawn or garden project will most often come along with unexpected challenges.  An ecological restoration project is no different.  In both cases, we create environments with certain desired characteristics.  Whether it’s a vegetable garden with minimal weed cover, a lawn free of moles, or a natural buffer without buckthorn, we strive to prevent certain aggressive species from changing these target environments.  Species that have the ability to wreak havoc come in many shapes and sizes – from tiny, microscopic bacteria to rather large feral pigs. Even aggressive native plant and animal species can tip the ecological balance and cause problems. One species that repeatedly cause challenges for natural shore restoration is the native muskrat. So why do muskrats cause problems and how do we deal with these interesting but often naughty aquatic creatures?

A common goal for most shoreland restorations is to sustain a diverse native plant community with a minimal cover of invasive plant species. The Minnesota native muskrat presents a unique conundrum. It is a natural component of high quality shorelands, but yet it creates a disturbance that can damage restoration areas. The muskrat often creates burrows that can cause bank instability and erosion. They also dig up and feed on aquatic and shoreline plants, often targeting young plants that were just installed. This type of feeding activity usually kills immature plants. Typically, large populations of muskrat cause more substantial damage. 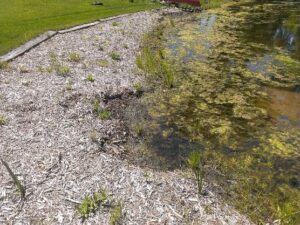 The muskrat is in the rodent family Rodentia.  They are not actually rats, but somewhat resembling a cross between a beaver and a rat.  Muskrats get their name from the “musky” odor they use to mark their territory, as well as their rat-like hairless, veined tail.  Semi-aquatic and living in still or slow-moving water, muskrats are a common site in the ponds and wetlands that dot the Twin Cities.  In these more developed suburban areas, muskrat enjoy a lack of predators.    In the outlying areas away from the cities, mink and otter do a good job in controlling muskrat populations.

With low predator numbers and impressive reproductive rates, muskrat often flourish in Twin Cities’ ponds and    wetlands.  An adult female can have 2-3 litters of up to 10 young each summer.  Can you imagine the muskrats’ delight after we restore a shoreline and plant several hundred tasty, young plants to feed their growing family?  It’s only natural for them to seek out new food sources along the shore. This is what they inherently do. 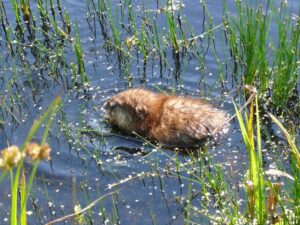 So when looking at how to deal with these sometimes pesky creatures, options include removal, exclusion, and acceptance. We know of numerous projects that have tried these options with varying degrees of success.   The most heavy-handed approach – removal – is usually like swimming upstream. However, the MN Department of Natural Resources does allow the “taking” of nuisance wild animals that cause property damage.  Taking means capturing, relocating, or killing a nuisance animal.  Consult your local DNR conservation officer about removing nuisance wildlife.  In some cases, controlling muskrats can provide relief for your restoration. Nevertheless, hiring a wildlife control expert can be costly, and there is the real likelihood of muskrat reinvading your restoration in a relatively short amount of time. 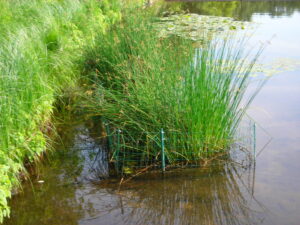 We have found that exclusion (for up to around two years) is effective in controlling muskrat feeding damage to young restoration areas. Putting up fencing can limit the ability of muskrat in finding and consuming the small and tender plant material. Mesh along the toe of the shore can prevent muskrat from creating burrows underneath your restoration.

These methods have varying degrees of success, depending on installation approaches, site conditions, and the size of the muskrat populations.

It may be a challenge to get your arms around the ideas of “acceptance”, but the muskrat is a common and very resilient resident of Twin Cities’ shorelands. We believe it makes sense to limit muskrat activity in newly created restoration areas. But once a site is mature, it is most often futile to keep putting resources into heavy-handed control. One can look at the muskrat as a natural component that creates natural disturbance to shores. The robust native plant communities along natural shores can withstand feeding and burrowing impacts much better than turf grass along the water’s edge. This is certainly an advantage to creating quality buffers along your wetlands, ponds, and lakeshores. 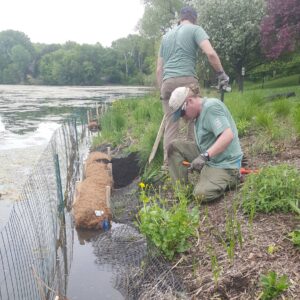 Are you at your wits end with these wannabe aquatic engineers? Our staff is here to help you establish a natural shore that can withstand the disturbance that the muskrat can dish out. We also have experience with choosing native plants that are less appealing to the muskrat palate. We also have two decades of experience in putting up fencing that will get your restoration off to a fabulous start. Give us a call and we can discuss a strategy to create natural buffers that will make it easy to live with this amphibious rodent that we sometimes love to hate.