We often run into people that want to contribute to pollinator conservation by adding natural habitat, but at the same time, are leery of the idea of inviting more bees to their properties. No doubt bee stings hurt, and it’s totally reasonable to have a bit of fear of getting stung. However, if you know just a little bit about the ecology of bees and wasps, you can avoid the dreaded “sting” and still enjoy the native plants that provide amazing natural and critical habitat for a multitude of pollinators. 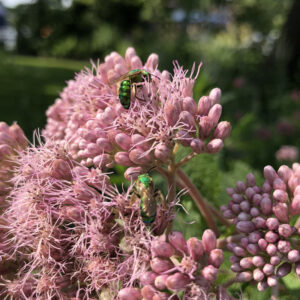 Identifying bees and wasps can be tricky, and there are even species of flies that mimic them. Both bees and wasps can sting, but only the females have stingers. Bees have round, ovate bodies whereas wasps have long, cylindrical bodies and often have a narrow, thread-like waist. When most people think of bees, the honey bee comes to mind. The non-native European honey bee is the only species of bee in North America that produces honey. They were brought over by settlers to increase crop production. Honey bees are social and sometimes swarm around their hive. They are not particularly aggressive but will sting if provoked and then die after stinging.

There are nearly 20,000 bee species in the world with 4,000 of them in North America. The Minnesota Department of Natural Resources reports that there are over 400 species in the state, with more being discovered each year. In general, most native bees are solitary and are busy collecting nectar or pollen, so they don’t pay much attention to humans. About 70% of bees nest in the ground, excavating tunnels in bare spots with loose soil. The other 30% nest in small cavities, such as trees, hollow stems, and holes in rocks. Depending on the type of wasp, they may nest in the ground or construct a paper nest hanging in a tree. A solitary bee or wasp does not share a nest and takes care of its own young. They usually do not sting, and would rather choose flight over fight. Social bees and wasps nest in colonies, and are more likely to sting to defend their nest. 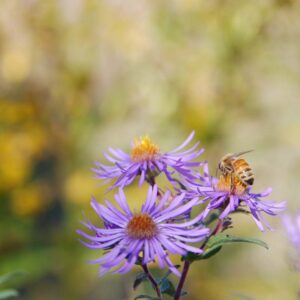 There has been some recent research done that compares domestic honey bees to wild native bees and investigates how they interact. One study by Herbertsson, Lindström, Rundlöfc, Bommarco, and Smith (2016) found that honeybees outcompete native bees in places with low plant diversity, such as in suburban neighborhoods with sprawling lawns and limited natural features. Another study by Tehel, Brown, and Paxton (2016) shows that honey bees may transmit diseases to native bees that would otherwise not come into contact with. The impacts of these diseases on native bees is relatively unknown, and there is still more research to be done on the interactions of honey bees and native bees.

While people think bees are to blame for most stings, social wasps are usually more likely to sting. Social wasps include yellow-jackets that nest in the ground as well as bald-faced hornets and paper wasps that hang nests in trees. Most of them emerge in August and can be active up until the first frost. These social wasps become aggressive when their nests are disturbed. They can sting repeatedly and release pheromones that signal other wasps there is a danger nearby. There can be hundreds and even sometimes thousands of wasps in a single nest. It is usually easy to spot where a ground nest is located since they are busy flying in and out. These wasps only become a concern when they are nested near a lot of human activity. 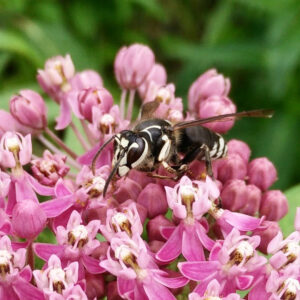 You may be wondering… what are wasps good for anyway? Although wasps are often considered to be pests, they are actually controlling a variety of pest species. Wasps provide a great ecological service that often goes unnoticed – insect control. Solitary wasps can be formidable, especially the Great Black Wasp (Sphex pensylvanicus), but they are indifferent toward humans. Wasps will feed on all kinds of invertebrates, from grubs to grasshoppers. They are great to have around in the garden. Many of them also help pollinate plants.

Do you think you’re ready to introduce more native plants to your yard to help our native bees and pollinators? The new, Minnesota cost-share program called Lawns to Legumes encourages landowners to create pollinator habitat on their properties. There are options to install native pocket plantings, flowering trees and shrubs, bee lawns, and/or pollinator meadows. These plantings are multifunctional, providing pollinator food and habitat, filtering water, sequestering carbon, improving soil health, and increasing biodiversity. The program is focused on helping recover rusty patched bumblebee populations and other declining species. Applications for funding of fall projects are being accepted through June 2nd.

There are many different ways to incorporate native plants into your landscape, whether you prefer a natural look or more formal garden. We are happy to help with design, installation, and maintenance services. We work closely with you to determine your specific goals, and create practical, custom designs that balance human use with nature. If you want to do it yourself, our nursery has an excellent selection of native plants to choose from. Online shopping is now available at https://www.naturalshorenatives.com