As our calendar year turns over into a new beginning, we all ponder the thought of a “New Year’s resolution”. January presents an exciting opportunity to begin fresh, inviting a clear pallet of thoughts as luminous as a fresh Minnesota snowfall. A great resolution usually involves the opportunity to expand our thoughts and learn new skills that help us grow as human beings.

One resolution that may be of interest to those passionate about ecology is learning a new language of sorts, the language of plants and their classification.The system or language of how living things are named is called “binomial nomenclature.” This method was formalized by a famous botanist, Carl Linnaeus, way back in the 1700’s. It is a beautiful language that helps us to effectively describe our native plants and share information with scientists and plant enthusiasts across the globe.

Of Swedish heritage, Carl Linneaus was an extremely productive citizen, working as a botanist, ecologist, professor and doctor. He was fascinated with nature and realized that there was a lack of a proper classification system. Before Linnaeus came up with his legendary naming system, scientists did not have a standard way of naming plants and animals. Linnaeus developed binomial nomenclature, a simplified and conventional system of naming that assigned each plant a genus and species. This practice has been implemented for over 200 years and is universally recognized. Linnaeus and his legacy lives on through this uncomplicated system that has stood the test of time.

You may be asking yourself, why even bother learning “fancy” latin plant names when we have English common names? Well, we have the answer. Common names are not standardized and often change through time. Also, they often vary across regions and can differ from state to state. Even within one region, the same plant species can have multiple common names. Simply put, common names can be unreliable and can add a lot of confusion. For example, a native shoreland species that we use quite a bit in our projects is called woolgrass or common wool sedge (Scirpus cyperinus). Woolgrass is actually not a grass; it is in the sedge family, so this species has a common name that adds some confusion. When plant scientists casually talk about “woolgrass” they will often use the common name, but when conducting formal surveys or devising restoration projects, scientific names are used to assure clarity and accuracy.

The principal ranks in the modern taxonomic naming system are domain, kingdom, phylum, class, order, family, genus, and species. Most of our restoration work involves classification at the family, genus and species levels. A fun way to think about genus and species is that it is sort of similar to comparing our first and last names, with the last name representing the genus and the first name coinciding with the species. As mentioned before, each plant has its designated genus and species names. A plant genus encompasses a group of plants that share similar characteristics and are related enough to be classified under the same name. This is very similar to our own last names; we are related to those who share our last name and often share many similar traits. The species label affords more resolution and separates individuals within a particular genus. We can then loosely compare this to our first names, which are tailored to a specific person in each of our families. Accurate writing of scientific names involves the genus listed first and then species, with genus being capitalized. Plant names are also italicized or underlined. Here is an example for the native prairie species – bergamot, a plant that we frequently use in our restorations:

take a step back further in the taxonomic ranking system, “families” consist of plant genera that share broad attributes, involving similarities in plant parts and flower shapes. Plant families vary in size, with 50% of all plant species belonging to the top 15 plant families. One of the largest families is the Asteraceae (aster) family, and its defining features include multiple small florets that mimic a single flower, bracts surrounding the flower cluster, and most, but not all, species have parachute-like hairs that allow dispersal in the wind.  Plants such as the dandelion, boneset, thistles, and sunflowers are all in the aster family. Recognizing the physical characteristics of plant families will make it easier to narrow your search and identify specific plant species.

We hope this article has inspired you to delve into the exquisite language of plant taxonomy. It certainly can be really fun and incredibly useful at the same time. Here are a couple of book recommendations for learning more about taxonomy and how plants are identified and classified. We are so excited to start a new season of discovery and learning from nature, and hopefully you will join us on this journey and take your own observations a bit further. Happy New Year! 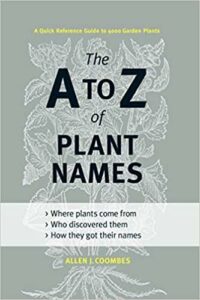 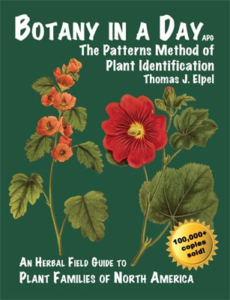 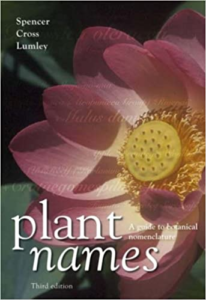