As the summer season quickly cascades into fall, our maintenance crews reflect on another season and what made it unique from past seasons. Every year is different and even though these observations are anecdotal, collectively they are interesting and help us understand the systems that we create and manage at Natural Shore. Below are a few highlights that our staff put together. We are really happy to share them with you! 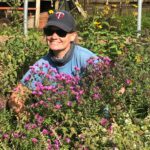 This growing season will obviously be characterized by the severe, prolonged drought experienced by most of the state. With 90-degree days being the norm in June, we had prolonged heat lasting throughout the summer. Although fieldwork became even more physically challenging, we took some time to cool off and make some interesting observations. I believe I saw less ambush bugs this season, but more soldier beetles. I did note a good number of adult monarchs, but not as many in their larval stage. The caterpillars I did see at the retail greenhouse in the morning, couldn’t be found later that day.  Maybe they were trying to escape the heat somewhere closer to the ground, in the shade of larger plants? We definitely saw fewer snakes this season, but other creatures of the wetlands like frogs and toads seemed to be more abundant than in other years.

The heat and humidity helped many native plant species grow and flourish, but the lack of rain took its toll on numerous species. It seemed like some plant species bloomed for very short periods of time, while other species, like butterfly weed and cardinal flower, have been blooming for months! I wonder if pollinators for certain species impact bloom periods during a drought? Are certain species spending less time producing seed and more energy growing deeper roots that tap into moist soils? We noticed that some seed in the field was immature, shriveled, and didn’t seem all that viable.

Unfortunately, we also ran into a good number of angry ground nesting wasps. They seemed especially sensitive to our maintenance activities during the drought. Crew members got stung on a daily basis, and that was the price of doing good maintenance. We kept working through it and were rewarded by seeing loads and loads of bumblebees this year, including several rusty-patched bumblebees, an endangered species. Throughout the harsh summer conditions, we were still amazed to see how beautiful our native plants looked compared to turf grass lawns or ornamental garden plantings. This season was definitely a testament to the benefits of planting deep-rooted native flowers and grasses that are drought tolerant and provide essential habitat for our wildlife. 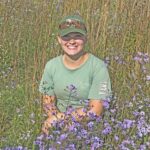 Our season began in April, an early spring filled with an abundance of amazing and inspiring wildflowers. Spring quickly turned into summer with record breaking heat and meager rainfall in the Twin Cities. Most of our native plants handled the drought very well, but some species did get pretty stressed. I noticed shorter bloom times, wilting leaves, and more insect damage on our plants. Grasshoppers really thrive in drought conditions, which became apparent to us by mid-summer.

As the drought persisted, the shorelines we maintain seemed to double or triple in size. We saw wetlands dry up and lake levels drop dramatically. This led to receding shores and much larger areas of shoreline to manage. Annual plants such as smartweed and jewelweed took advantage of the open space where water once stood. Purple loosestrife, an invasive species, also took the opportunity to colonize bare ground. Other native pioneer plants including Boneset, Joe Pye Weed, and Monkey Flower became more abundant. Late summer rainfall increased water levels in most of the metro area, but I wonder if this hotter and drier climate will persist into next season?

The cooler temperatures over the last couple of weeks have been a welcome change and a much needed break from the heat of the summer. As fall sets in, the asters are coming into full bloom and don’t seem affected by the tough summer weather conditions that we experienced. They add brilliant pops of color to the fall landscapes in shades of white, blue, and purple. These asters provide crucial nectar sources for monarch butterflies. Monarchs have begun their journey south to Mexico, an incredible feat that makes me wonder what they see and experience on the trip down. 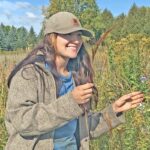 The 2021 growing season not only forced me to drink gallons of water throughout the day, but it also taught me a lot about plant succession and community changes during these hot, droughty conditions. This was especially evident on the ponds and shorelines we work with on a daily basis, with early successional plant species taking advantage of exposed mudflat areas. Various Smartweed species, Water Plantain (my favorite pioneer species), Boneset, and Beggarticks to name a few. A non-native noxious sedge called Yellow Nutsedge (Cyperus esculentus) also seemed to enjoy the open soil and popped up and spread in robust colonies.

Another ecosystem, its name coming from the Latin name “pratum”, meaning meadow, flourished during this uniquely intense season. Yes, the prairie meadows were truly impressive with their beautiful textures and colors blazing in the hot sun. A particular plant stood out to me, blooming in early July through August, and it truly stands up to its common name “Wild Petunia”. Ruellia humilis is a beautiful native groundcover species found in very well-drained, hot soils. The flowers come in shades of periwinkle, and their beauty is immediate with each individual flower emerging in the morning and then fading away in the evening. It was amazing to see this Minnesota state species of special concern popping up in our restorations.

Though we are just starting to enter the early part of fall, we have been observing woody species already turning their crimson and golden shades, especially at the top of the canopies. I cannot tell you how many times one of our crew members has said “it looks like fall”. Plants are starting to send energy from the sun into their roots, setting themselves up for winter. Just as plants use this energy from the past year into the next, I will use the knowledge that this season, and future seasons, have given me throughout my ecological restoration career. I will also pack as much water and sunscreen that can fit in between our tools- from now on!

Are there any interesting observations or thoughts you had about this season? Care to share them with us? Comment on our Facebook and let us know what you think of this year and what you discovered!