Well, it was inevitable, but we just received a few inches of that white stuff that is such a part of our hearty Minnesota social fabric. Yes, winter will be soon upon us. In the cities, it was a pretty wet and heavy snow, enough so that our taller prairie plants started to tilt and lean from the weight of the snow. Peering into our natural buffers and prairie patches, we began to notice small patches of bare ground – yes exposed soil! Of course, in the summer, a diversity of robust prairie and shoreland species steal the spotlight, being the main actors on the stage of a healthy restoration. They totally blanket the soil layer, and “out of sight, out of mind.” But this time of year, if you look a little closer, you see the soil base – the foundation that all restorations are built upon. 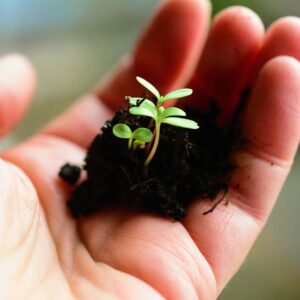 We rarely even consider it, but soil is actually alive! So what really makes up soil? Soil is a mixture of decomposing organic matter, minerals, water, void spaces for gases like oxygen, living organisms such as bacteria, fungi, insects, and even tiny plants. It changes and evolves over time. It’s super easy to forget, but soil is so much more than just bits of rock, sand, and clay.

If we take a deep dive into soil health, one of the main actors is fungi. Their role is critical to the soil food web. There are over 144,000 known species of fungi, which include mushrooms, rusts, molds, yeasts, mildews, and more. Fungi used to be considered plants, but they do not photosynthesize, instead they break down their food using secreted enzymes and absorb them through their cell walls. Without a doubt, the most popular fungi associated with soil is the mushroom. We notice the above ground parts, with numerous species having brilliant color and interesting shapes. The below ground portion of the mushroom is called the mycelia, which is made up of long, branching strands of hyphae. 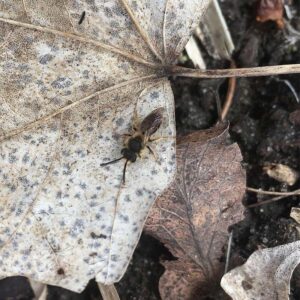 How do soil and fungi interact?  Intricate webs of the underground parts of fungi, called mycorrhizae use the soil as a substrate to interact with plant roots, passing water and nutrients back and forth for the benefit of all species involved. This interaction between the underground fungi and the plant’s root system is called mycorrhizae. Over 90% of plants have these types of interactions with mycorrhizae. Fungi allow plants to take up nutrients like phosphate and nitrate from the soil, which is essential to plant growth. Some fungi even promote the passage of carbohydrates among plants. Also, there are species of fungi that live in certain plants, and in turn, the plants benefit by being less tasty to herbivores.

One interesting example of how mycorrhizae and plants interact is with our state flower, the Showy Lady slipper. Like most orchids, the Showy Lady slipper produces a very large amount of super tiny seed. In fact, so small that the embryo in the seed doesn’t have the stored energy available to germinate, like larger seed from other plant species. So, how do they germinate? Well, of course, with the help of fungi! The mycorrhizae transfer nutrients and carbohydrates from the soil and into the seed so it can grow. Because of fungi, we have our beautiful state flower and a multitude of other amazing native orchids! 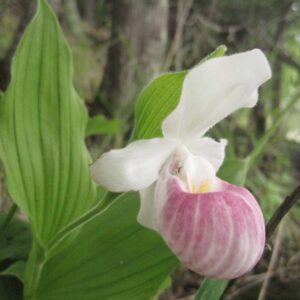 Would you like to protect and encourage these mind-bending plant-soil-fungi interactions on your property? There are a few really easy thing that you can do: 1) This time of year is the perfect time to help your soils by literally doing nothing! Often times we want to rake up every leaf in the yard or garden, but by leaving that litter on the ground, it helps put more organic matter into the soil. An added bonus – this also provides nesting sites for butterflies and moths that use the leaves to pupate. 2) Use less chemicals and fertilizers; too much is not healthy for our soils. 3) Avoid excessive digging. Disturbed soil often liberates weed seed and you may soon have a mess on your hands. 4) Reduce compaction. If the soil is wet and soggy, give it time to drain before using equipment, like mowers, tractors, and four-wheelers.

Our staff is always here to help you promote healthy soils and exceptional ecological restorations!