Did you know much of the cattail you see growing around ponds, wetlands, and lakes throughout Minnesota is actually non-native and invasive?  In Minnesota, we have both a native broadleaf cattail (Typha latifolia) and an invasive narrowleaf cattail (Typha angustifolia).  Unfortunately, these tend to readily hybridize with one another, producing an aggressive hybrid (Typha x glauca).  The hybrid has shown to tolerate a greater range of water depths and salinity, allowing it to invade many types of habitats.  This is especially evident in the Twin Cities area as well as rural/agricultural wetlands, where it forms vast contiguous mats, or monocultures.  This very aggressive behavior of forming large mats is quite effective in choking out native emergent and wetland plant species, like bulrush and a variety of sedges. 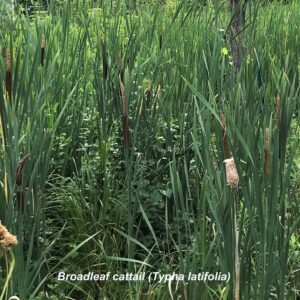 Distinguishing between the varieties of cattail is difficult with the naked eye.  Generally speaking, the common names can help you distinguish the native and invasive varieties.  As you might expect, the narrowleaf cattail’s leaves are about ½ inch wide, roughly half the width of the native broadleaf cattail. But this method is not entirely effective because the hybrid cattail will exhibit qualities of both the native and the invasive species. Genetic testing is the only way to know for sure which cattail species you have. However, taking a look at the behavior of a cattail stand over time gives some solid clues in deciphering which cattail species you may be dealing with.

Native cattail are quite conservative in their growth form and have evolved to co-exist with other native plant species. Comparing these growth forms can indicate what type of cattail you might have.  Does your cattail play well with others or does it take over? Usually, the native cattail grow sparsely, and do not form dense stands. Often, the native cattail will co-mingle with species such as bulrush, arrowhead, and burreed. In addition, our native cattail will stay put in one place for a few years. If expansion does take place, it usually takes several years to notice a difference.

Here is where the water gets a bit murky. Even though the invasive cattail poses as an ecological threat, they also serve an important purpose in our wetlands.  Both native and invasive cattails filter water, stabilize erodible soils, and sequester carbon.  They also provide a food source for mammals (e.g. muskrats), nesting cover for birds, and habitat for fish.  The alternative of no plants is a much worse situation, which is why the MN DNR requires a permit for all cattail removal.  Invasive cattail can provide vegetated habitat and shoreline stabilization, where other plant species have been lost and the native seed bank is depleted.

So say you have properly identified your cattail and secured a DNR permit for removal, what do you do now? Well, an effective method that does not require herbicides is to cut the cattail flush with the ice. Winter or early spring is a good time to cut cattail as natural spring flood levels will hopefully submerge the cut stems and eventually suffocate the plants.  Less established plants can be hand pulled, but once they are more established the root system is too extensive to pull completely.  Alternatively, chemical control is also an effective option.  But it is important to use aquatic safe herbicides and always secure the proper permits.

Like with any ecological restoration, you should have a plan set to introduce native plants, once the invasive species are under control. Some of our favorite native emergent plant species to introduce along the shore are sedges, water plantain, spike rush,  bulrushes, bur-reed, and arrowhead. Wind action and soil type are important considerations in choosing which species are most appropriate for particular shorelines. Ultimately, ongoing maintenance is necessary to hold back the aggressive cattail, especially in urban settings.

If you are thinking about transforming your invasive cattail stand into a diverse wetland habitat that supports many more birds, pollinators, and other wildlife, we are here to help.  Natural Shore can provide you with a variety of emergent plant species for DIYers, and well as providing design, installation, and maintenance services. Please give us a call today!

Previous Post: « If you have a love for Monarchs, then why not go crazy for a variety of nectar-rich native plants?
Next Post: Top 10 Native Plants for more Traditional Urban and Suburban Landscapes »
FOLLOW US ON INSTAGRAM